Escaldes and Engordany are two towns from the seventh parish of Andorra, located on the central valley, at the intersection of the Valira d’Orient, Valira del Nord and Gran Valira rivers.

The aim of the Engordany Route is to show the peculiarities of Engordany. Escaldes and Engordany are two towns from the seventh parish of Andorra, located on the central valley, at the intersection of the Valira d’Orient, Valira del Nord and Gran Valira rivers. Nowadays, Escaldes and Engordany are a single urban area, but they were originally two separate locations. Engordany has its own set of defining characteristics and is older than Escaldes; archaeological remains dating from the 2nd and 1st century B.C. have been found at the l’Antuix site. Until the early 20th century, Engordany had more population than Escaldes, and its economic activities stemmed from the use of thermal water. Engordany was the stage of the living Nativity scene in the 1950s and has maintained some vestiges of the recent past of our country through agriculture and livestock breeding. 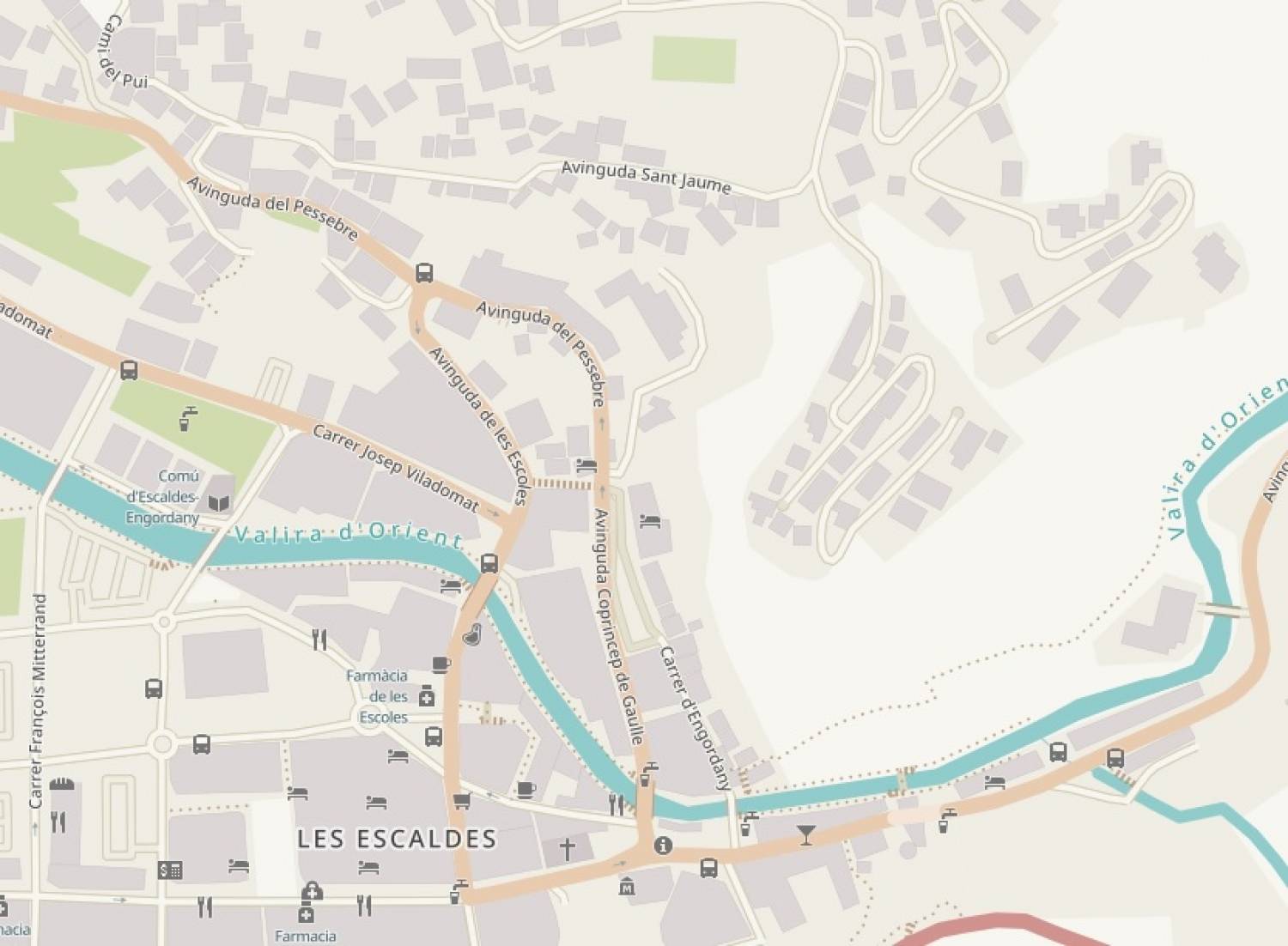 The Sucarana patches were the natural stage for the living Nativity scene during the 1950s, a dramatized representation of Jesus’ birth by the people of Escaldes. The living Nativity, also known as the Duralex Nativity, was one of the first touristic initiatives in the country and has recently been recovered by the Comú (city hall) of Escaldes-Engordany.

Like many other Andorran squares, Engordany Square was at the centre of social life, conversations, gossip and festivities, especially during the summer. In this square we find Cal Cabó with its plastered façade, as was current for the houses of wealthy peasants, made with stone and a layer of plaster to favour thermal insulation.

Located in Engordany Square, Casa Mateu stands out due to the verticality of its construction and its many windows, which have been the product of recent interventions.

The house is at the heart of the social and economic structure, not only because of its architectural structure, but also because of its members and of the wealth associated to the family. There were stronger and humbler houses. The focs were the strong houses that contributed to the payment of the quèstia (medieval tribute paid to the Coprinces); they participated in the administrations and had an inheritance system designed to avoid the dissemination of the estate by having the heir (know as an hereu if male or pubilla if female) inherit everything, except for the legitime, the share inherited by the other descendants (cabalers).

The church of Sant Jaume d’Engordany contains the archaeological site of l’Antuix. A medieval monastery linked to Sant Serni de Tavèrnoles was first built there, and progressively acted as a church for the neighbours of Engordany. This temple slowly deteriorated over time due to the lack of use until the 1950s. A contemporary temple was later built, with elements reminiscent of the original construction.

The architectural and natural heritage of Engordany thereby becomes the key to understanding the recent past of the country.

Cal Coté allows us to witness the use of another important construction material: wood. Be it pine or fir wood, this material was used to build the beams of the various floors and the structure of the roof. It was also used on the floors, the partitions and the roof. Due to its importance, its extraction from the forests and utilization was managed by the administrations.

We can see the wood in the framing of the windows of the façade, which are smaller on the sides deprived of solar exposure and larger on the main façade and on the more exposed sides.

It is also the material for the musicadures, millennial decorations on wood. They originate from the art of shepherds, who carved these ornaments with a single tool. They have recently been rediscovered and popularized by Sergi Mas.

The Rec d’Engordany irrigation canal is a hydraulic structure used to provide the agricultural fields of Engordany with water. It currently flows beneath the ground due to urban pressure. The society of irrigators was created during the 19th century, despite the canal being older.

The Engordany bridge remains one of the places that marks the physical separation between the two towns, but it was a union as well. The Engordany bridge is made of stone and was built in 1785 following the destruction of the older bridge by the 1772 flood. Casa Jaume de Roca, which houses the seat of the Historical Archive since 2001, is located next to the bridge.

Cal Mestre de Tura is reminiscent of the layout of traditional houses, with three floors: the ground floor was used as a firewood storage area, a stable and a cellar; the first floor contained the kitchen, the dining room and some bedrooms, and the attic was a multi-functional space used for chores such as shelling, spinning and cleaning, as well as storing agricultural tools and old objects. It could also be used as a drying room for agricultural products and as a common guest bedroom for weddings, town festivities, etc.

This square is dedicated to the Esbart Santa Anna, a folkloric association of dancers from the parish founded in 1950 and focused on recovering part of the intangible heritage of the country. This square has a granite fountain similar to the thermal water fountains scattered throughout Escaldes. This fountain, though, is located in Engordany, and therefore has no water.

Casa Bicari has a porch on the ground floor with a public safareig (washing place), a place for washing clothes and for social meetings, especially feminine, which is the origin of the expression fer safareig (to gossip). Soap made with caustic soda, oils or fats and water was used to wash clothes. The ashes from the fireplace were used as bleach to wash white clothes, as they contributed to give them whiteness.

The barn of Cal Ricart is a good example of traditional construction materials, local material such as stone. Stone is the basic construction material of the Andorran house, abundant and easily obtained. It is used uncut and united with mud or lime on the outer walls. Stones were only cut to build thresholds and outer angles of certain houses that required walls to be more compact.

This barn, like many other constructions from this architectural ensemble, is functional, practical, is adapted to its environment, built with local materials and devoid of any decorations.

Andorra had a traditional economic system based on a subsistence economy, which was focused on agriculture and livestock breeding, limited by the high mountain climate and the utilization of the few available resources. The cultural landscape that resulted from these activities is partially preserved in Engordany. Some examples of the uses and customs of Andorra in the late 19th and early 20th centuries are still present. The old Rafel barn can be considered the starting point of the Engordany ensemble, which was declared to be an architectural ensemble of interest by the Comú (city hall) of Escaldes-Engordany. Its constructions are reminiscent of the traditional agricultural activities of Andorra prior to the 1950s, as the economic boom caused the country to transition from an agricultural society into one based on tourism, commerce, baking and construction.