The Rossells were one of the most powerful families in Ordino and Andorra from the 15th century onwards. The details of their magnificent stately home and of the neighbouring constructions show the economic and social weight of this family.

Documented since the 15th century, Casa Rossell has been one of the most important houses of Andorra both on an economic and political scale, along with Casa d’Areny-Plandolit, as they were among the great owners of land, cattle or forges. Casa Rossell has also given birth to many distinguished public figures, such as Antoni Fiter i Rossell (1706-1748) – author of the Manual Digest (1748). 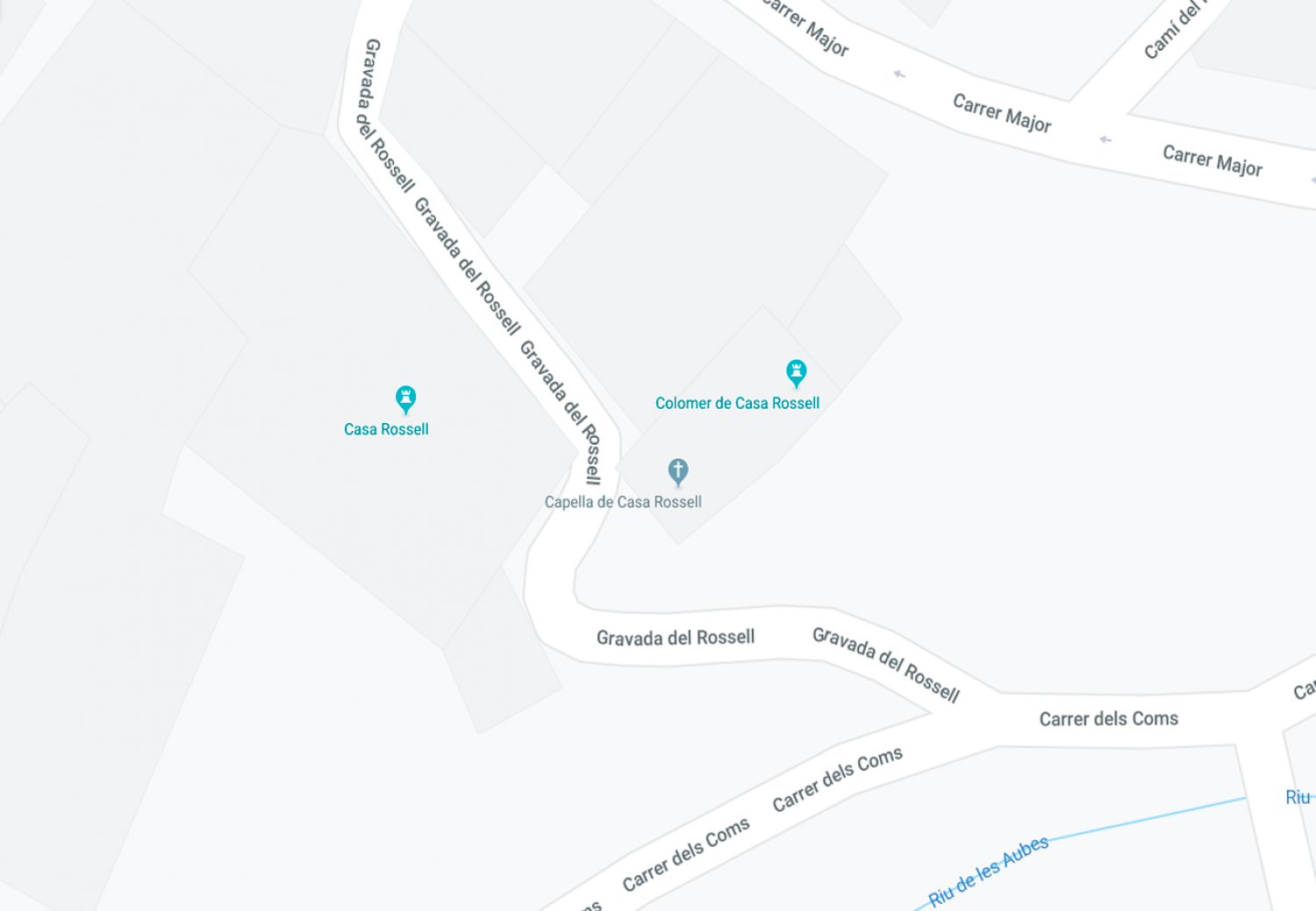 We are standing in front of Casa d’Areny-Plandolit, the other most powerful family in Ordino in modern times, along with Casa Rossell. Both houses are only separated by a few meters, and they both made fortune and increased their wealth through commerce with land and cattle, and they even made business together by opening a joint forge. They established matrimonial alliances to better their interest and some of their members were part of the political and legal elite of Andorra.

The constructions of Casa Rossell became the property of the Andorran Government in 1993, after the death of the last descendant of the house, Maria Lluïsa Riba Cassany (1908-1993), who had no children or testament. In 2003, the ensemble was declared to be a Property of cultural interest and therefore benefits from the maximal level of protection established by the Law on Cultural Heritage.

The name Rossell already appears in the oldest preserved documents. The Second Concord, signed by the heads of the household of Andorra on January 8th 1176, states that three families sharing this name were living in Ordino: one in Llorts, another one in Sornàs and a third one in Ordino. Some historians have considered these 12th-century Rossells to be the ancestors of one of the most distinguished families in Andorra. Still, linking them remains a bold move, as there are no further proofs that confirm this theory, although the Rossells of Ordino have been constantly referenced in medieval documents.

This street used to be known as Gravada del Mallador, as it led to the threshing floor (mallador) of Casa Rossell. Still, as it is surrounded by properties of the family, the Comú (City Hall) of Ordino decided to rename it Gravada del Rossell. The word gravada refers to a paved street, as steep roads would be paved so as to prevent the rain from eroding them.

The two main volumes of the group of properties of Casa Rossell can be seen on each side of the street. The family house can be seen on the right, as well as the wall of the incomplete enlargement that was started and halted in 1968 due to economic problems. On the left, we see the small barn and the sharecropper’s house, two constructions that were part of another property but were bought by the Rossells at a time of economic strength in order to increase their estate.

The first document that allows us to identify the Rossells is a 1491 sentence between Ordino and la Massana for the control of the emprius of the mountain of Llorts, which was signed, among others, by Joan Rossell d’Ordino; this document listed the Rossells among the five wealthiest families in the parish of Ordino.

The first documentary reference to the current building dates from the mid-16th century, in the account book of the Comú of Ordino. The date coincides with the inscription on the stone atop the main door, 1611, followed by a Christogram and the letters M and I, which could correspond to the title of Molt Il•lustre (Very Illustrious) given to Antoni Rossell, as the following line reads ANT. RO. (ANToni ROssell). Joan Antoni Rossell Fiter (1638-1710) was a syndic of Andorra from 1683 onward. He is not to be confused with another well-known descendant of the family, Antoni Fiter i Rossell (1706-1748), a doctor in law, priest and lawyer, appointed as the representative of the Episcopal Coprince in 1739 and the author of the Manual Digest (1748).

We ignore why the date is so imprecise; nevertheless, the type of building and the results of the historical and archaeological study conducted in the early 21st century allow us to conclude that the house was built during the early 17th century.

Like other properties owned by prominent families of Andorra such as Casa Busquets (currently Casa de la Vall), these constructions are clearly influenced by the Catalan masia, with a layout in three corridors (a space between two load-bearing walls), where the central one is larger than the other two. Casa Rossell has a slightly trapezoidal floor plan and three main structures, and although it faces south-east, its main access (the main door with its semi-circular arch) is located west. The building was conceived as a home from the start, so the main barn was probably built at the same time.

Dovecotes were used for dove breeding: dove excrements were greatly appreciated and used as fertilizer; furthermore, these birds could also be eaten.

The thin wall covering and the ashlar on the windows were used to protect doves from their predators, like snakes and rats.

There were various types of dovecotes, ranging from a room in the house to even an independent construction in the shape of a tower, like the one in Casa Rossell.

Dovecotes were a symbol of high social status and could therefore only be afforded by the wealthiest families.

We can see some nests on the walls, as well as the openings through which they entered the dovecote.

A stroll through the gardens of Casa Rossell, which were once part of the vegetable patches of the house, takes us through a set of stairs to the centre of the town of Ordino. From Carrer dels Cóms, we can gaze at the splendid Casa Rossell, with its peculiar gallery and its façade. A last glance towards the 17th-century stately home and its surroundings, a sign of the power held by Casa Rossell throughout four centuries.

The chapel and the dovecote are the most recent constructions among those that form Casa Rossell. Both of them, along with the gallery, are meant to highlight the importance and social status of the family.

The chapel itself is the most recent construction. In 1779, the bishop of Urgell gave permission to build the temple, which was consecrated in 1780. This small chapel is dedicated to Our Lady of the Immaculate Conception, and contains a small image, one of the most distinguished artistic pieces of Andorran baroque, made by an anonymous artist by the mid-18th century.

The temple has been greatly modified since its construction. This building has a single rectangular nave facing north-east, with a small sacristy attached to the west. It also features a choir, probably the original one, which leads to a passage that connects the house with the chapel without having to cross the street.

A bell gable was added to the chapel after 1890.

The last modification was the replacement of the original wooden floor with the current concrete floor.

From the courtyard, we can also see the gallery with its pointed windows, one of the elements that try to emphasize the economic status of the family. We know its appearance is not the original one, as an 1890 picture of Ordino taken by the Hiking Centre of Catalonia (Centre Excursionista de Catalunya) shows how the gallery originally had a different appearance. It was probably modified between 1890 and 1930. In fact, galleries are rather rare in Andorran houses, as this type of construction is better suited for warmer climates; still, other Andorran houses, such as Cal Guillem in Andorra la Vella or Cal Giberga in l’Aldosa, also have galleries.

The main barn has two floors, each with a very specific function: the ground floor was used as a stable for the cattle, while the upper floor was used to store the hay, which was used to feed the cattle, once dry, throughout the long winter months, as the lack of pastures made it impossible to bring the cattle outside. One of its most prominent features is the large opening (gaial) that occupies the width of the façade.

Agriculture and livestock breeding were the main sources of income for the Rossells throughout their existence, although the structure of these activities changed according to the demands of the market. For example, between the 17th and 20th centuries, the family was a great producer of wheat, which was mainly destined for sale. By 1810, the Rossells owned more than 58 hectares in Ordino meant for the production of wheat.

From the courtyard, we can see the main façade of the house, facing south-east so as to make use of the abundant sunlight; this is why it has the highest number of windows. The ground floor has three windows protected by bars, while the two upper floors feature two balconies with iron rails: three on the first floor and four on the second. The wrought iron railing of the main balcony, which bears the initials of the family, was probably built in the mid-18th century, at a time of splendour brought forth by the iron industry and by a favourable economic and political situation. The end of the War of the Spanish Succession linked the Spanish and French monarchies, which had a positive effect on Andorran economy and encouraged free trade with our neighbouring countries.

The Rossells had been involved with the metallurgic industry at least since 1619, back when they were the owners of the El Serrat forge along with the Areny-Plandolits. Later, in the mid-19th century, Bonaventura Riba Calva married Francisca Magdalena from Casa Rossell and decided to build his own forge so as to increase the economic power of the family: the Rossell forge in la Massana, which functioned intermittently between 1942 and 1976.

By the mid-17th century, Casa Rossell was the second most important house in the parish of Ordino, just behind Casa d’Areny-Plandolit. As the Rossells increased their economic wealth, they also improved their social rank through the matrimonial alliances that they sought outside of our valleys, especially with members of the wealthy Pyrenean bourgeoisie. The political role of the family also increased.

Still, despite not being a political figure, the most well-known member of the family played a key role in Andorran politics: Antoni Fiter i Rosell (1706-1748), doctor in law and author of the Manual Digest (1748), which was commissioned by the Consell General. This book is a compendium of the history, government, traditions and customs of Andorra, with the goal of strengthening Andorran authority in front of two strong and expansive monarchies – Spain and France, as well as a compendium of the indispensable rights, privileges and exemptions needed for the correct functioning of the Andorran economy, which was deeply rooted in the exportation of heads of cattle.

The courtyard of Casa Rossell is a paved space meant exclusively for the family. The various elements of the estate were structured around this courtyard, which was used to carry out a series of tasks related to agriculture and livestock breeding, the main economic activities of the family throughout the centuries.

The flattest part of the courtyard was used as a threshing floor for a while: dry straw would be laid there and threshed by the mules that were made to walk in circles around it, so as to separate the grain (to make flour) and store the hay in the main barn. The current appearance of the courtyard probably corresponds to the 19th or early 20th centuries.

The chapel of Casa Rossell from the outside

The façade has a bell gable and its bell is still preserved.

The niche contains of the highest-quality baroque images of the Virgin Mary preserved in Andorra.

Interesting activities near this route