Route in Andorra is part of the cross-border Iron Route in the Pyrenees, which includes infrastructures in Catalonia, Aquitaine, Ariège, Guipuzkoa and Biscay. Through this itinerary, visitors will discover the resources linked to the production, obtaining and commercialization of iron in Andorra. The many interest points, scattered throughout the territory, allow us to discover one of the most important economic activities developed in Andorra from the early 17th century to the late 19th: the mines, coal bunkers, miner and iron habitats and forges are among the key points of the itinerary.

Other places related to the world of iron work can be discovered from la Farga Rossell: the Llorts mine, the carriers’ route, with a sculptural itinerary that pays homage to the iron men, Casa d’Areny-Plandolit – owned by one of the most important owners of forges – or the manufactured goods from the Andorran blacksmiths, such as those seen at the church of Sant Martí de la Cortinada.

The Iron Route in Andorra is a cultural itinerary meant to be discovered freely, in any desired order, completely or partially. The entire route spans 10 km from la Farga Rossell, in la Massana, up to the Llorts mine; a private vehicle is required in order to complete it.

You can purchase the educational backpack La ruta del ferro a l’esquena (“The iron route on your back”) for a funnier and more entertaining way of completing the Iron Route. The backpack is available at la Farga Rossell, at the Ordino Tourist Office and at the Llorts mine for €18 (it contains two activity books and all the needed material), or, if you want to, you can also download the two books in a digital format:

Hiking in the Iron Route

(PLEASE NOTE: The books and backpack are only available in Catalan and French) 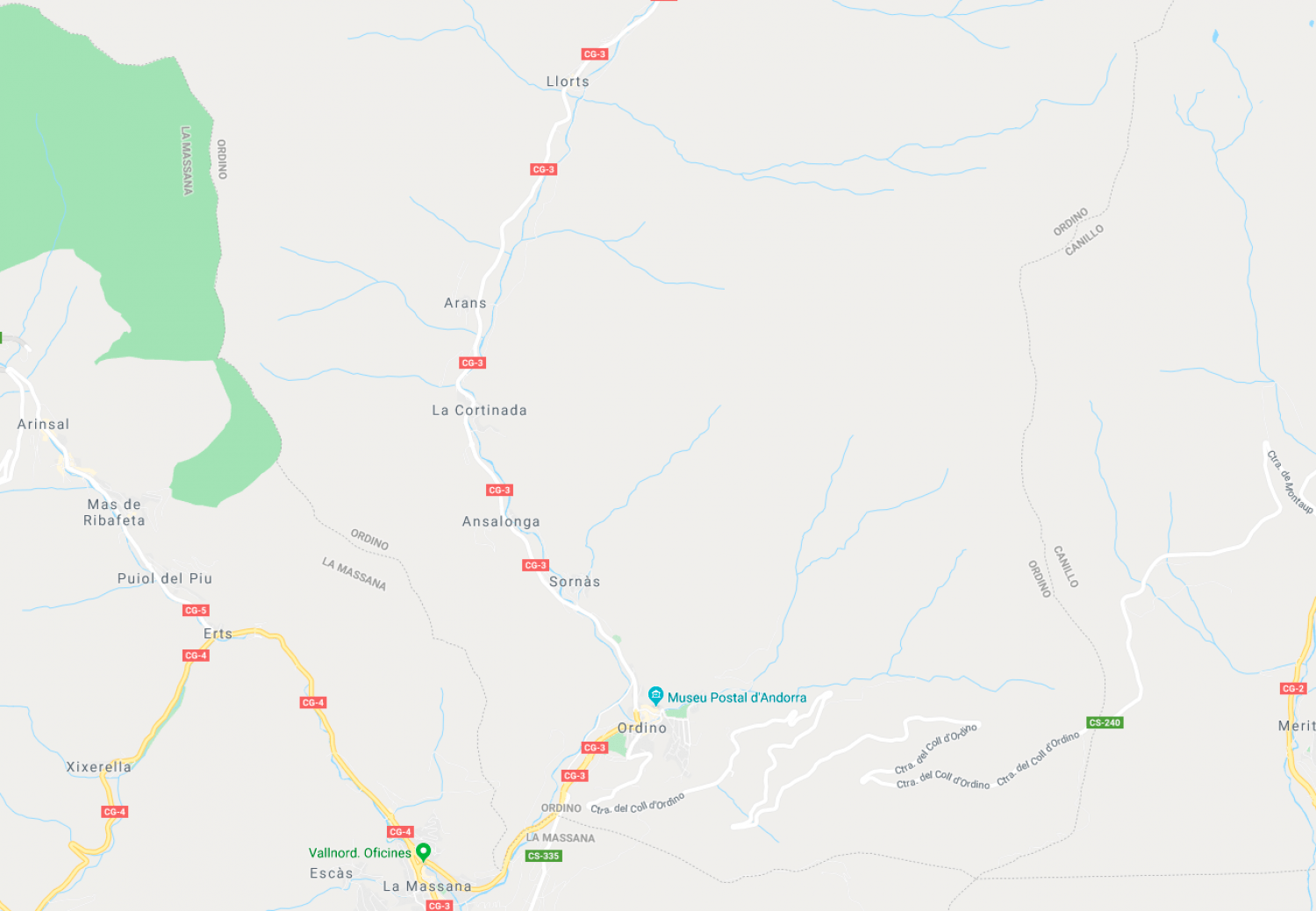 The Rossell Forge is one of the most well-preserved testimonies of the iron industry in the Pyrenees. It was built between 1842 and 1846 and functioned until 1876.

The home of the only noble family that lived in Andorra, surrounded by luxuries and habits unheard of in the country.

A 12th-century Romanesque church enlarged in the 17th and 18th centuries that contains some iron elements made in Andorran forges.

Throughout the 30 metres of the Llorts mine, you will discover the evolution and transformation process of iron, from the prospection and extraction of its ore to its preparation and manufacturing at the Rossell forge.

“Seven people meet each year to celebrate Christmas. They come from various parts of the world, but they belong to the same family: the Jordino family. Brother, sister, cousin? These sculptures, which I call the “extra-terrestrials” as they have been extracted from the earth, were born from moulds of urban earth made in various cities. Jeanne comes from Saint Petersburg, Aeyko comes from Tokyo, Felipe comes from Mexico, Richard hails from London, Izis from Cairo, Jean-Baptiste from Monaco and Titi from Paris. These seven characters are linked by a story, which I encourage you to imagine and create. As the poet said: “everything starts down here and ends beyond”.”

“The Great iron cart and pick aims at signifying and representing the union of two elements, deeply rooted and linked to the world of mining and iron work:

-  The pick, as an indispensable key element to extract iron from the veins of the mine; a fundamental and symbolic element that carries all the strength it represents;

-  The cart, representing the effort of transport, the symbol of the road itself. The cart transports the iron ore to the forge in order to be transformed.

These two real elements, representative of the iron road, are united to create a single plastic image, a single symbol in my sculpture.”

“My relationship with art is constructivist and environmental, with a direct link to nature. I like the spirit of Japanese gardens, like the temple of Ryo-Anji in Kyoto, where the elements are in communion with silence. Likewise, the wild nature of Andorran mountains radiates a great silent force. The water, the trees, the sun, the moon, the wind and the fauna entertain an endless dialogue in which the fusion of past, present and future is clearly apparent. My goal is to combine them all in a universal space.”

“Coming from the depths of the earth, the “iron man” walks between the rocks from which ferruginous water spills forth, along with the clears waters of the stream underneath. He returns home, exhausted by a day dedicated to the extraction of that mineral. Eagles soar over the valley of Ordino. He does not see them. He walks like a mole. The centuries have gone by. Eagles are now rare. The ferruginous water keeps oxidising the stones of the road and the waters of the stream are still clear.

The authorities of the valley have asked the sculptor to think about the “iron-man-walking-mole”. He will protect him and save him from falling into the stream that flows to the bottom of the ravine: he will create a 12-metres-long and 3-metres-high corten steel curtain, which will be oxidised along with the rocks.

Crafted by following a sinuous line and perforated to allow for the invigorated wind of the valley of Ordino to blow through, this iron tapestry will guide the “iron-man-waking-mole” through this perilous passage. We owed him all this. He has done so much for mankind...”

“The House of earth and fire keeps the future memory of the men of the valley of Ordino as they look for iron. A circle of birch trees surround the square house built with stones that come from the earth, an ancient construction that encloses and highlights the iron ore, transformed into a triple cube.

It is a mandala for the builders of this road that leads deep into the earth in search of the secrets of human fulfilment.

The design of this mandala reflects the senses of this deep landscape. Thus, this landscape is reflected in the circle of trees that surround a square house with no roof and a triple cube in its centre, a symbol of the creative energy of mankind, driven by the metamorphosis of matter. In those moments, its nature is transformed for the consciousness of being art and life.”

“A question in the shape of an answer: “Art, fortunately, is not reasonable.” This was my answer, years ago, to the question “what is art?” I think my bridge, with those men rolling a heavy boulder towards the river, is a good example of that “fortunately, not reasonable”. And yet, this is still not art, but in the end what is art?”

This part corresponds to the remains of a basic modern route which is an example of the importance of bridle paths at that moment. Ordino maintained good exchange and communication relationships from Toulouse to Tarragona until the mid-19th century, thanks to the muleteers.

The road can be accessed from la Cortinada, with the church of Sant Marti de la Cortinada as its starting point, or on the opposite side, from the Llorts mine.

The Iron Route is an easy route. It is advised to wear comfortable shoes and, in summer, to wear a hat and bring water, as you will find no drinking water sources.

Length of the itinerary:

-  From the sculptures (carriers’ route) to the Llorts mine: 1,5 km

The length of the itinerary can oscillate between 2.5 and 4 hours, depending on the pace and if the recommended activities are done. The whole itinerary can be done in a single day: an area has been prepared for picnics.

Please remember that the road is not circular and you will need to return to the place where you left the car. If you use two vehicles, you will find various exits throughout the itinerary: the town of Llorts, borda Vilaró, Arans and la Cortinada.

A magnificent house. You wouldn’t expect this small mountain village to hold so many wonders. Despite its simple appearance, this house has a beautiful history, and you can see how wealthy people used to live in those times. It is truly beautiful; I was surprised by the dinner set with its fine porcelain, more befitting of a Palace.
lacuinetadehorta
Barcelona (Spain)
La Farga Rossell

We had never heard about it before but it looks just as it did back when it was a full-functional forge. A very fun and enjoyable museum, the children will love the demonstration.
raquelaN4308PY
Valencia (Spain)
Iron Route

This is a 4 or 8-km-long route, depending on whether you go one way or both. We took two cars and parked one of them at la Cortinada and the other one at Llorts. Once in Llorts, we started from the Llorts mine and went all the way down to la Cortinada, following the Valira d’Orient river. The whole route was a delight, easy and perfect for children.
Eugeni S.
Sant Pol de Mar (Spain)
Sant Martí de la Cortinada

A beautiful church, a must-see if you visit la Cortinada. It is characterized by its stone construction and its location.
AlbertPouget
Barcelona (Spain)
Anterior Següent